Prarabdhi will play Lord Krishna in the soon-to-be-launched show ‘Sree Krishna Bhakto Meera’. The makers were in search of the lead actors for quite some time and contacted a number of actors for the same. Finally, Prarabdhi
impressed the makers and bagged the role of Lord Krishna.

He is elated to have bagged the new project, too, as a lead. The actor, who is originally from Ranaghat, is prepping up for his new inning. He is earning praises from his fans as well as industry peers, ever since the first promo of ‘Sree Krishna Bhakto Meera’ went on-air featuring him as Lord Krishna.

Prarabdhi isn’t a new face for the Bengali television viewers. In ‘Bhagyalokkhi’, he played the younger brother of Rahul and Farhan Imroz. The show produced by Sashi Sumeet Productions, concluded its journey recently. Prior to this, he also played a role in the popular daily soap ‘Irabotir Chupkotha’, which featured Monami Ghosh and Syed Arefin as the lead jodi. 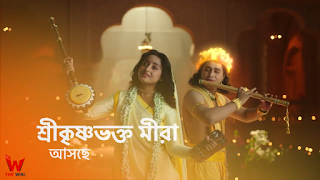 Star Cast:
Story:
Currently, there is no update about the release date of the show but soon we will be updating the premiere date and timing. However, Shree Krishna Bhakto Meera is expected to be aired from May 2021.