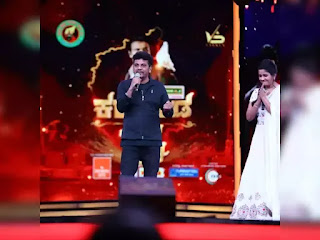 On the show, Ravichandran who has composed a song which traces the life journey and achievement of Puneeth Rajkumar since his tender age when he won national award will be played on the stage along with a dance performance. Music director Hamsalekha has composed a song on Puneeth Rajkumar which is being crooned by Kambada Rangiaah, who was one of the contestants of singing show Sa Re Ga Ma Pa.

Actors Shivarajkumar will also croon a popular song Baana Dariyalli on stage. The event is organized by GKGS trust and Varun studios has impressed viewers with it’s promos and pictures which is being shared on social media.

Read Also
Puneeth Rajkumar’s ancestral house in Gajanur being made into a museum
Puneeth Rajkumar passed away at the age of 46 due to cardiac arrest on October 29 which was a shock for the people across Karnataka. His dream project Gandadha Gudi which was shot for over a year will be released next year.