Sushant Divgikar: ‘We only see token gay contestants and characters on mainstream TV’

Actor-performer Sushant Divgikar, who has been in the entertainment industry for 15 years, found mainstream TV success back in 2018, when he performed as his drag alter-ego Rani KoHEnur on the singing reality show, Sa Re Ga Ma Pa. However, the former Mr Gay India (2014) feels not much has changed on television since then as far as representation of the LGBTQI+ community is concerned. “Be it a reality show or otherwise, I feel there are only token gay contestants or characters today, if at all - which is not okay. There's a need for more representation in daily soaps, movies and OTT content, because that can help change people’s mindsets,” he tells us.

This Pride month, he speaks to us about the entertainment industry's shortcomings and double standards related to the representation of LGBTQI+ community.

‘BOTH PEOPLE ON SCREEN - AND THOSE BEHIND IT - NEED TO BE SENSITISED’
Several artistes have spoken against straight actors playing LGBTQI+ roles in the industry, but Sushant doesn’t mind it as long as the actor does justice to the part. He says, “An artist’s job is to act, so I don’t hold it against them. Of course, I feel that in an ideal world a trans woman’s character would be played by a trans woman, for example, or at least someone from the queer community so that it looks realistic. But if a hetero***ual woman is getting the role and doing it well, then that’s great too. On the other hand, if she doesn’t do justice to the role, then it looks like a joke. That should not happen, viewer dekh ke cringe na kare!”

Sushant adds that “it’s not just people on the screen, but those behind it - like the ones writing the scripts - that need to be sensitised towards the community as well.”

‘IT’S IRONIC THAT MANY BELIEVE QUEER PEOPLE CAN’T SING FOR STRAIGHT PEOPLE’
On the other hand, he feels that it’s unfair that he has been denied the opportunity to sing for straight people. “People have said, ‘you can’t do this because you are too gay’ or ‘you can’t sing for a woman because you are a man’. If I can sing in a woman’s voice better than some other woman, then why not? I can sing in two voices and have a four octave range. A singer is a singer. If you can give hetero***ual people queer roles, why can’t you have queer people sing for straight people? That is the biggest irony,” says Sushant, who identifies as genderfluid.

“There are certain music labels that are being proactive. But I don’t think enough companies are doing it. Today, I am the face of so many brands not because they are doing me a favour but because I am talented,” says Sushant, who released his single Diamond in 2020, featuring him in his drag avatar, adding, “When a person walks in for an audition, then they should be judged on the basis of their talent, not where they come from or their ***ual orientation. We have so much talent in our country then why not celebrate it?” 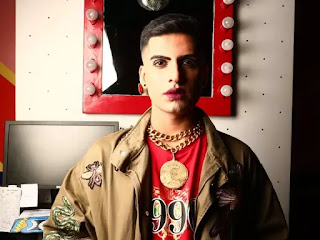